These are just some of the things that are ingrained into my memory after attending the SaskPower Windscape Kite Festival.   Day one was marred with rain and mud, but day two was an event to be remembered.   For the last few years this festival has been on my to do list, but it never worked out.

I drove through the rain on Saturday, worried that the whole weekend would be a bust. My husband laughed at me because I finally had to cover an event in the rain.  I put on my rubber boots, zipped up my raincoat, and found all of the volunteers taking shelter in the covered tents.

Seven visiting kite flyers braved the weather and practiced a few routines out in the soggy field. I was immediately impressed at how synchronized they could be, even in the temperamental weather.  I snapped a few quick photos, then ran for cover. 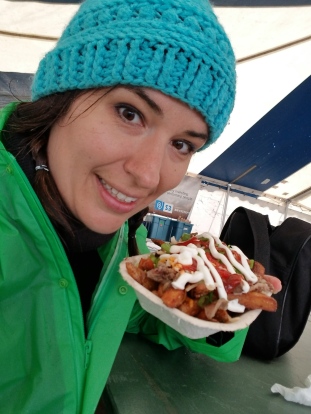 Fast forward to Sunday morning, I pulled open the curtains from my Comfort Inn hotel room and was doused in sunlight. Yay!

As I pulled up to the festival, I was mesmerized by the creatures that filled the sky. The grounds were buzzing with excited volunteers and kite enthusiasts.  The tent walls were open and the puddles were drying up.  The wind was blowing, but at a kite festival, that’s a good thing.

My eyes quickly noticed a sign advertising kite lessons, so I signed up before the crowds came. A nice couple from Fort Qu’Appelle watched as I repeatedly smashed the kite into the ground.  It’s harder than it looks! After about 8 tries, I finally managed some flight time.  It was exhilarating to be able to steer the kite.  The sun blinded me as I tried to keep my eyes on the blue kite above me.  Left, right, somersault….and smash.  Back to the ground.

Having tried my hand at kite flying, I was even more amazed as I watched the performers. I now had an understanding of how difficult it is to stay afloat, let alone synchronize a show, to music, with multiple kites. 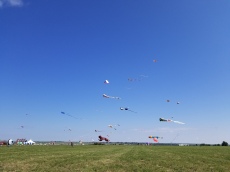 Throughout the day, I wondered around taking in the sights and watching people of all ages enjoy the events. Volunteers manned all sorts of fun stations and the kids were having a blast.  Bubbles, face painting, bail maze, paint wall, balloon animals, sand pit, and more!

There was an open field for the public to fly kites, which could be bought from a couple of vendors. Kids ran freely, with long orange streamers flying behind them.  Food trucks served a variety of yummy dishes and the ice cream bike did lap after lap.

Kite flyers from all over the world performed and it was apparent that they had developed friendships over the years because of their mutual interest in kites.   People lined the fields in lawn chairs, enjoying show after show.  There was one show that included two kites with three long tails each.  I couldn’t peel my eyes away as the kites danced to “The Power of Love.”  Is it weird that this was one of the most romantic things I have ever seen?  The precision and thought put into the show was amazing.

At the end of the day I saw clouds coming, so I wandered one last time through the Wind Sculpture Garden. This was so neat.  Recycled and used items were made into pieces of art that moved with the wind.

I jumped into my camper van and gave a big wave to the volunteers manning the gate, thankful that the event I had been waiting to attend for a few years was just as great as I knew it would be.

Here is a video of the weekend.  Have you been to the SaskPower Windscape Kite Festival?  What was your favorite part?