Once again, it is time to recap the year.  I’ve been pouting a bit, thinking that I did not do enough this year, but looking back, I remember that I actually did have a lot of fun.

It was last February that I finally went ice fishing for the first time.  I enjoyed it so much, that I picked out ice fishing equipment for the family as my Christmas gift this year.  Hopefully next time I will even catch a fish!  I also spent some time touring around Indian Head and Wolseley.

In March I attended the Cypress Hills Destination Area’s Spring forum.  I love learning from the pros and meeting like-minded people!  I reconnected with Gregg, from Medicine Hat YMCA, and organized a high rope adventure at Camp Elkwater.  I had a blast challenging myself to balance wayyyy up on narrow wires and boardwalks.  The best part was having my sister right beside me! 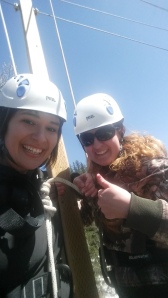 In March I also joined forces with Carefree Adventures and Cypress Hills Destination area to promote Saskatchewan Adventure at the Step Into Spring trade show in Swift Current.   A video that I had made of our Grasslands kayaking adventure was played for the crowd.  That was nerve wrecking, but very exciting!

April was a busy month! Not only did I climb the high ropes, but I joined Carefree Adventures on a test kayak through Eastend.  It was an honor to be joined by Dominique Liboiron, who had previously canoed to New Orleans all the way from Eastend.  He posed for a photo at the starting point of his 8 month adventure. I plan on organizing a group kayak/ camping trip in  Eastend in the future, so stay tuned!

For the past few years I have attended Swift Current’s annual 49 x 110 Tourism Conference.  This year, I was asked to present!!  Yikes!  I managed to talk to the crowd and present a video on Leader, Sk, without passing out.  Ha Ha!

Again, this conference allowed to me network and I was invited back to Southern Prairie Railway in Ogema, Sk.  This time would be extra exciting, as travel writer Robin Esrock would be joining us.  The train ride was enjoyable, as always, but the best part was getting to meet many fellow bloggers in person.

Every year my community hosts Wild West Daze.  This is a weekend event that includes slow pitch, tractor pulls, concerts, train rides, yummy food, and more.  This year I was hired to promote and capture the weekend.  I am excited to use the video ads I made to advertise WWD 2017!  You should start thinking about entering a team for the coming year.

Extreme family commitments had me traveling to and from BC 4 times throughout 2016.  These trips allowed for family visits, but were more ” business” in nature.  I did, however, fit in some hikes and adventure on my solo trip.  Frank’s Slide and other roadside stops helped clear my mind. I posted a few pics on my Instagram. ( Hint Hint)

Our 1976 Vanguard Motor home managed another BC trip, and our family enjoyed a few adventures along the way.

Summer flew by, as always, and what better way to end it than with another kayak adventure?  This time, I joined Carefree Adventures on a media tour on Cypress Lake.   My husband brought the RV and we made a weekend out of it.

Fall found me dealing with more family ” stuff” as well as being a Co-op teacher for a         U of S intern.    What a fun experience!  I’m not sure where the time went!

In November, we managed to host a 60th b- day party for my mom and her twin.  I am just now going through the footage from my video camera.  I let my step daughter run free with the camcorder, and the results will be great for future weddings!

Life never goes as planned, but it is up to you how you react to the curve balls.  2016 had many ups and downs.  I did not blog as much as I had hoped to, but am excited for 2017 and the opportunities that it will bring.

Here’s to new beginnings! Happy New Year from my family to yours!